, /PRNewswire/ -- A new study of working men and women across the U.S. reveals that while progress has been made over time, many working moms and dads still fear that their family responsibilities may cause them to experience significant challenges at work.  Those who do feel supported by their employer report strong loyalty to their employer.

To view the multimedia assets associated with this release, please click: http://www.multivu.com/mnr/7227551-bright-horizons-modern-family-employees-struggling-responsibilities 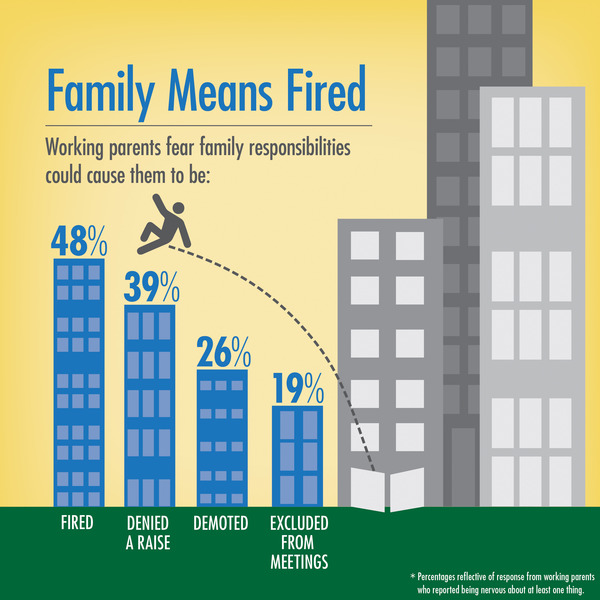 The Modern Family Index, commissioned by ® (NYSE: BFAM), explored what it means to be a working parent today and revealed that while much has changed about how parents approach family obligations and commitments, many employees still feel like they can't be honest with their supervisors about family responsibilities.

Key findings, outlined below, include:

"For more than three decades now, there has been an ongoing dialogue about the need for family-friendly workplaces, and so many leading employers have worked to create cultures that foster a healthy integration between work and life," said Bright Horizons® CEO , who joined President Obama at this week's White House Summit on Working Families.  "However, it is clear that working parents throughout the U.S. are still struggling to manage all of their responsibilities, and many still feel that they cannot be honest with their supervisors about needing to be available and active in their family lives.  This is causing undue stress on mothers and fathers alike and ultimately hurts productivity."

The Modern Family Index uncovers the challenges working parents in America face today as they try to meet employer expectations and family obligations.  According to the survey, working parents are looking to their employers as a main source of support so they can be their best at work and at home.  In fact, more than four in ten (41 percent) don't feel they can be a successful working parent without a supportive boss – a factor second only to a spouse/partner who shares in the household duties (49 percent).

When employees are worried or distracted, factors key to organizational success like employee productivity, retention and engagement suffer.  Research shows when employers can eliminate sources of distraction for employees, they benefit from engaged and committed workers.  Employers who do this best are those that recognize their employee's obligations both in and out of work, and help them to fulfill those commitments.

DOES FAMILY MEAN FIRED?
According to the Modern Family Index, working parents admit they have feared that their family responsibilities could negatively impact their career and could actually get them fired or demoted.  They also worry that because they have family obligations, they will not be assigned key projects and that they will not be invited to important meetings, hampering their ability to grow professionally.

Six in ten (60%) working parents have at least one work-related concern caused by family responsibilities:

WORKING PARENTS SOMETIMES MAY LIE TO GET BY
While many would argue family responsibilities and work/life balance are accepted and commonplace, employees today remain as nervous to bring up family-related issues as work-related issues with their employers and in some cases are even more hesitant to talk about family obligations.  Because of this, working parents admit to not being truthful about their family obligations.

DADS: NO LONGER A WOMEN'S ISSUE
The struggle to successfully manage a career and a family is no longer a stress primarily felt by women.  Men surveyed admit to being stressed out by child care needs during the work day as well as their ability to achieve a good work/life balance, and are just as likely as women to say that family responsibilities could jeopardize their career.

THEY'D TRADE IT ALL FOR QUALITY CHILD CARE
Even though working parents report becoming better employees in many ways since having children, working parents continue to stress about child care needs during a typical workday and would be willing to forego higher paying jobs, vacation time and other benefits for reliable child care.

Forty-nine percent of parents stress about child care emergencies or general commitments to their children while 85 percent of working parents say they would be willing to make at least one sacrifice in order to secure reliable child care:

"We work with hundreds of leading employers who have taken these issues seriously and have built supportive cultures.  In 2014, supporting working families is not just a nice to do but rather a must do for employers looking to sustain competitive advantage within the markets which they compete," said Lissy.  "Working women and men have whole lives and they have a lot of responsibilities outside of work.  We know that employees who feel like they have the freedom to manage their family responsibilities and to be involved at home are more likely to be more productive when they are at work. That is good for the employee, the employer, the family and our nation as a whole."

About ®
® is a leading provider of high-quality child care, early education and other services designed to help employers and families better address the challenges of work and life. The Company provides center-based full service child care, back-up dependent care and educational advisory services to more than 900 clients across , the , , , and , including more than 130 FORTUNE 500 companies and more than 80 of Working Mother magazine's 2013 "100 Best Companies for Working Mothers".  Bright Horizons is one of "100 Best Companies to Work For" and is one of the Best Workplaces as designated by the to Work® Institute. Bright Horizons is headquartered in The Company's web site is located at www.brighthorizons.com. 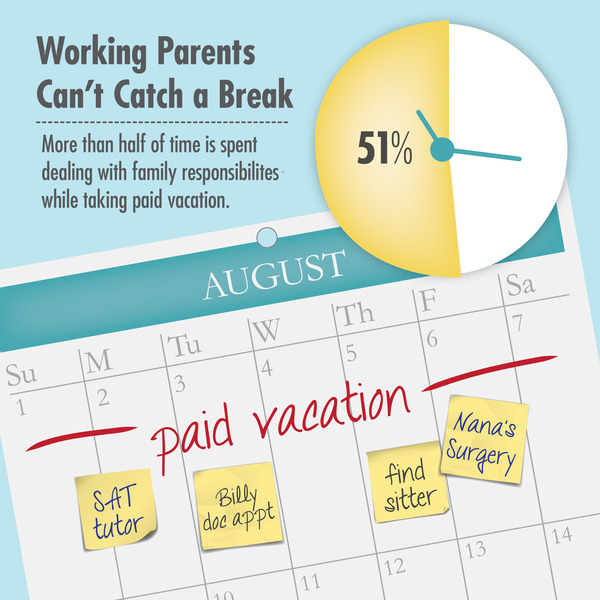 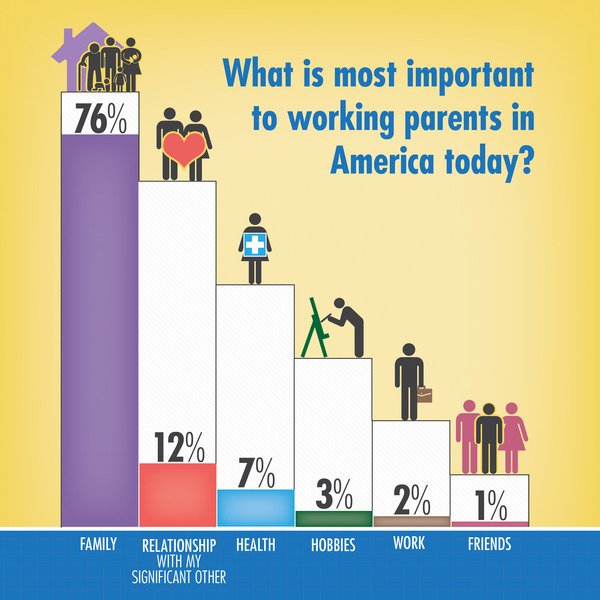 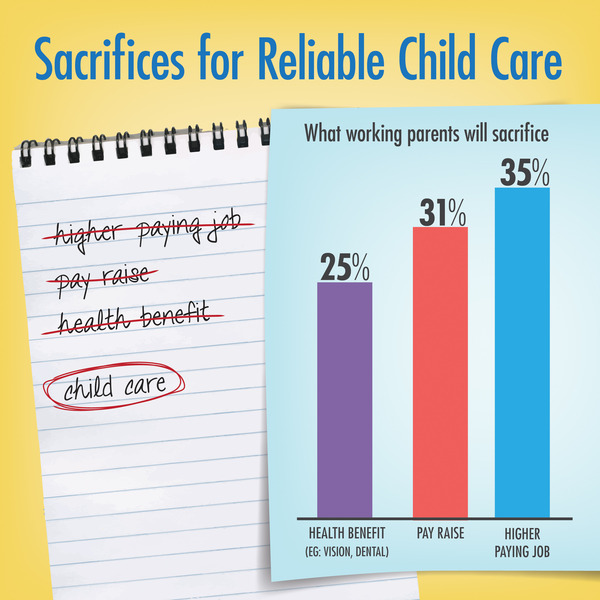 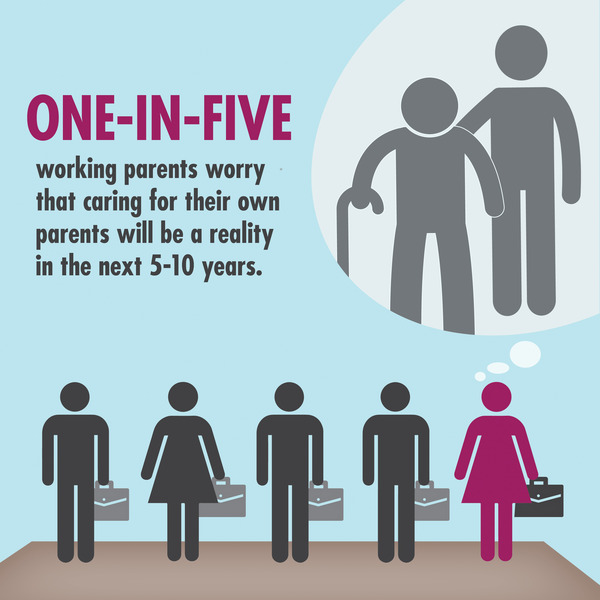 To view the multimedia assets associated with this release, please click: http://www.multivu.com/mnr/7227551-bright-horizons-modern-family-employees-struggling-responsibilities